A Week With Wine Is Always A Good Week 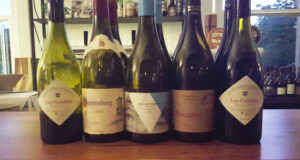 The lineup of Gamay at Harry and Frankie

One of the advantages of moving to the big smoke of Melbourne is the ability to taste lots of different wines and meet interesting people at wine  events. This week has been a winner on both scores.

Tuesday was the Australian Women in Wine Awards, a fantastic initiative to promote and create awareness of gender equality in the wine industry. To enable anyone to celebrate the awards they were streamed to events all over the country. Here is the link if you would like to learn more about the awards and see who the winners were, http://womeninwineawards.com.au/2016-winners-announcement/

I was lucky enough to attend the Melbourne event at Wine House. Each guest bought a bottle to share, which meant there were a great range of  wines to taste. It was great to celebrate the achievements of the women in wine with like minded industry folk.

Wednesday night was a Gamay tasting at Harry and Frankie in Fitzroy. I was particularly interested as I will be running a wine class soon about what to drink this summer (more to come on that later).

Gamay produces lighter style of red wine that has lovely acidity and lower tannin which often expresses a fresh crisp and fruit driven style. The  wines we tried were from Beaujolais in France , Serbia and Australia-Meadowbank in Tasmania and Sorrenberg from Beechworth. Each wine was different, some were older others younger, the range of aromas and flavours was telling of their origin and age a great comparison. Thanks to the team at Frankie and Harry for the great hospitality.

Well as they say its a dirty job but someone has to do it.

Virginia Jacobs is a wine educator who has shared the joys of wine with keen amateurs and budding professionals for many years. With a Masters of Wine Technology and Viticulture from Melbourne University, and more than a few tastings under her belt, Virginia will guide you in appreciating the wonders of wine.